In a bittersweet combination of personal achievement and global emergency, I moved to Norway and started working on a new research project right when the COVID-19 epidemic started sweeping across the world. When I was settling in my new office and sketching out the next three years of academic careering, friends and relatives were quarantined in Wuhan or bracing for lockdown in other parts of the world. And as I’m writing this post, I’ve moved back to my university residence right before the WHO declared the virus a pandemic and my department building was locked for a few weeks of state-enforced social distancing. Regardless, the project I’m excited to be part of is about machine vision, and I’ll be looking into how this technology is deployed and utilized in Chinese everyday life, which seems to be slowly getting back to a degree of normalcy. In the meantime, China has been using machine vision to look into itself and try to track down the virus as it spread through its citizenry. 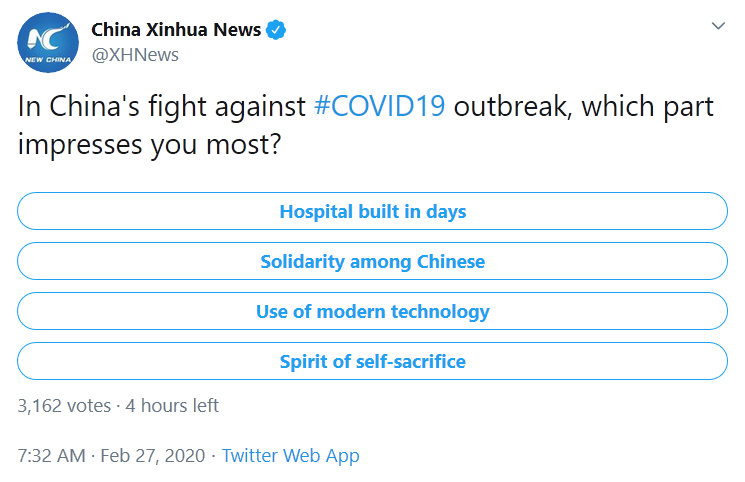 Following the outbreak through social media and news headlines, I noticed the diverse roles that machine vision has been playing in this situation, and followed how this technology is embroiled in variegated discussions ranging from the widespread distrust of authoritarian surveillance and the enrolling of homegrown tech industries into state propaganda to enthusiastic paeans to datafication and digital governance. More than a centralized attempt of the government to enforce a degree of legibility onto its citizens – what James Scott would call “seeing like a state” – China’s response to the COVID-19 epidemic seems to be benefiting from a new kind of sensing that is enabled by digital technologies deployed as an integral part of a state of exception. In Benjamin Bratton’s words, this is an important phenomenon because

[t]he optical positions of a state—how it sees the world and its constituents and how its citizens see themselves reflected through the ambient qualitative commons—might bear all the benefits and bankruptcies of earlier forms of communicative reason. (2015, p. 121)

But how did China’s “optical position” vis-à-vis the COVID-19 outbreak consolidate?

In the early days of the contagion, once the (by now disputed) origin of COVID-19 was pinpointed to the Huanan Seafood Wholesale Market in Wuhan, the virus was mostly tracked by concerned citizens via vernacular forms of coveillance: people would take photos of license plates and share them on social media, warning each other about the suspect presence of Wuhan residents in their town or district. In the absence of official measures or recommendations, all that people had at their disposal were mobile cameras, social networks, and the imperfect geolocational information provided by car plates. This strategy was quickly adopted by local authorities, that started tracking the movement of drivers across provinces; partial reports would circulate as copy-pasted news or screenshots, stoking a climate of ambient fear about Wuhanese residents. For example, one WeChat comment alleged that data from the Shenzhen Public Security System and the Center for Disease Control identified 60,000 people entering Shenzhen from Wuhan, worrying the local government and prompting a warning for the local population to stay put and prepare to spend the Spring Festival at home.

Tech companies quickly reoriented their platforms towards this sort of cross-regional surveillance, drawing on intersecting streams of data: as another WeChat message warns, Alibaba had supposedly tracked 6,000 Wuhan residents conducting Alipay transactions in Shanghai over a single day, hinting at a massive exodus from the city and an impending danger for the coastal metropolis. For many, this repurposing of smart city systems and platform urbanism was a foreseeable confirmation of the state’s surveillance capabilities. As Liza Lin documents on the Wall Street Journal, tracking the movement of infected or at risk individuals was a readily available capacity of China’s surveillance apparatus, which extends from roads to subways and from smartphones to social media, combining visual identification with geolocation and other sorts of data trails.

Another intersection between COVID-19 and machine vision is more mundane, and revolves around people’s faces. As the virus spread, citizens resorted to using face masks (for a situated history of this object, see this), which were also made obligatory in the most affected provinces; yet, people quickly realized that wearing masks affected ths convenience and usability of face recognition systems including smartphone locks, community gates and payment terminals. Many noted the uncanny resonance with the proposed ban on face masks during the 2019 Hong Kong protests, which was supposedly motivated by the need to identify protesters; even though pandemic and protest are two radically different states of exception, they spotlight the face as a contested nexus of biopolitical affordances. Regardless, technological fixes often trump convenience in exceptional times: mask-vending machines that use face recognition to identify buyers and ration masks started popping up, and eventually a tech company in Chengdu developed a 3D face recognition system capable of bypassing face masks while also checking a person’s body temperature. 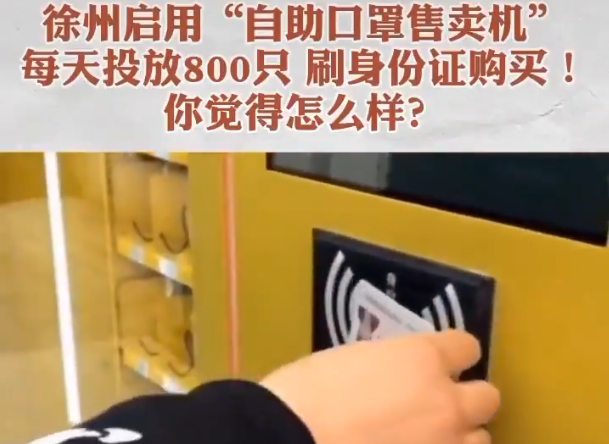 Besides car plates and masked faces, local tech companies have competed to play a central role in facilitating life under quarantine, which conveniently also helped spotlighting their commitment to public service by strengthening governmental responses. Alongside donations, emergency services and information platforms, artificial intelligence has predictably emerged as one of the central contributions of companies like Tencent, Baidu and Alibaba, which have offered their cloud computing platforms and predictive algorithms to researchers for efforts in tracking infection vectors and simulating drug compounds. A broader definition of AI has cemented the impression that this technology is powering China’s response to the epidemic, as exemplified by the many reports marveling at automated health information chatbots, autonomous vehicles used for disinfection and delivery, and a hospital ward “run entirely by robots” in Wuhan. 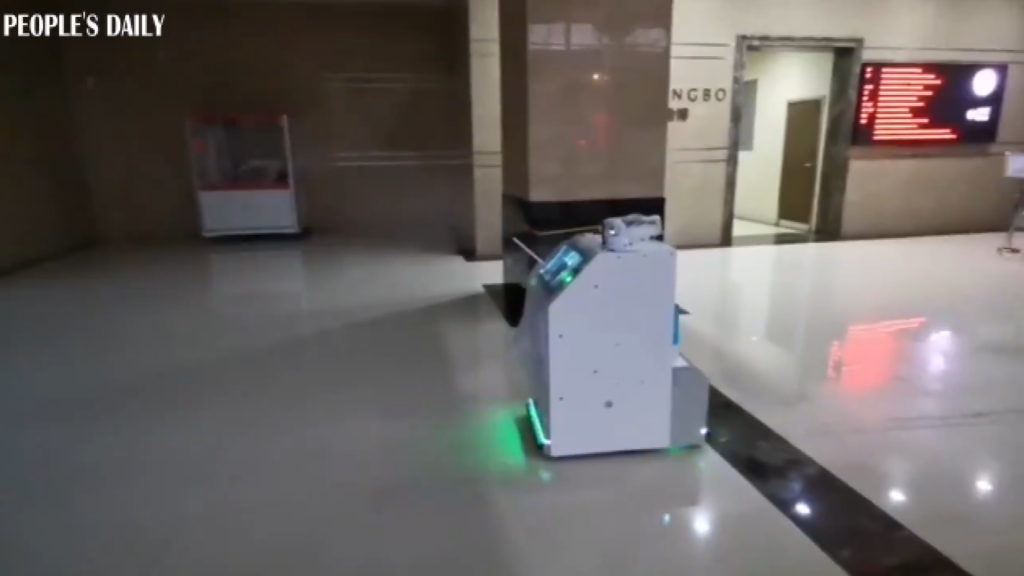 One specific example of how the use of machine vision technologies is both overblown and contested is offered by drones. As the COVID-19 virus spread beyond Wuhan, some residents of small towns and rural areas uploaded drone footage depicting people engaging in activities outdoors being remotely reprimanded via on-board loudspeakers and prompted to wear face masks and head back home. Given the funny lines dubbed over the footage, it is likely that these videos were mainly produced by minor online celebrities as humorous content to be shared on social media or as public service announcements for local officials; and yet, outside of China they were framed as a dystopian example of authoritarian control in a surveillance state, while local state media appropriated them as examples of national innovation. In practice, drones have been used for a broad range of tasks, including holding informational QR codes over traffic, spraying disinfectant and checking temperatures at a distance. While their actual usefulness in these contexts remains questionable, as David Li notes this sort of experimentation is only natural given the size of China’s drone industry and the ready availability of heavy-duty drones for agricultural use across the Chinese countryside. 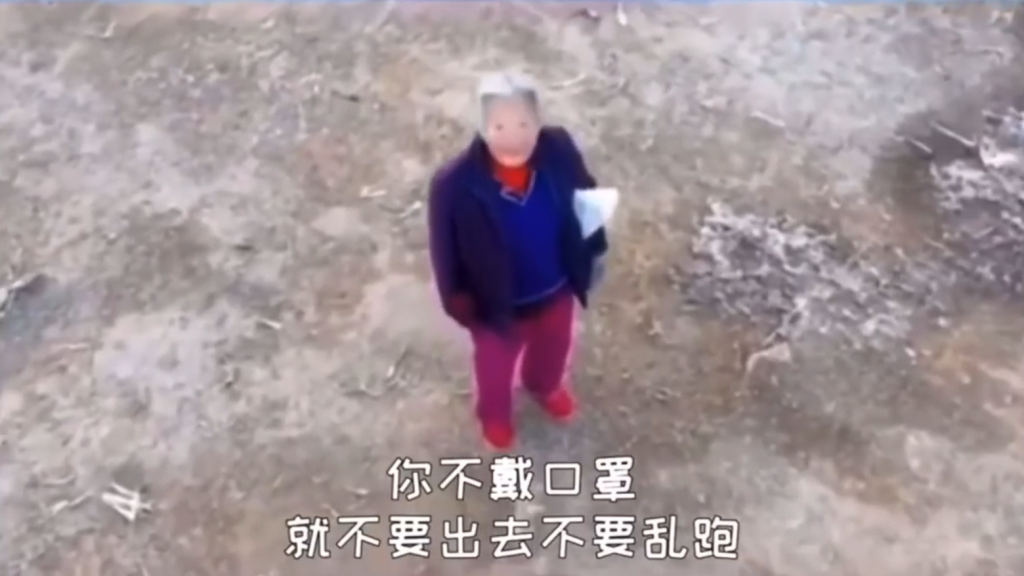 QR codes themselves are perhaps the simplest form in which machine vision is utilized across China today, and throughout the outbreak they have been deployed as gateways for a wide variety of purposes – from linking citizens to quarantine declaration forms and cellphone roaming histories to directing digital payments and donations. The most relevant innovation here has been the system launched by Alibaba in Hangzhou that assigns a color-coded QR-code to each citizen, based on a self-declared travel history and health status connected to real-name identification, allowing them to clear checkpoints in public spaces. The green, yellow & red QR codes have subsequently been launched in Shanghai as well, and their integration in Alipay’s ‘City Services’ function showcases the efforts of platforms to become infrastructures. Similarly, ride-hailing apps have also introduced a system requiring users to scan QR codes when they use public transportation or taxis, in order to collect data and share it with health authorities to help track contacts between passengers. 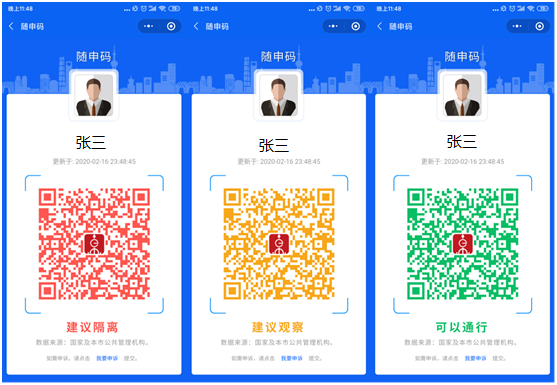 It’s important to note that machine vision also powers screening and diagnostic technologies. Checkpoints set up at airports and stations and building entrances often deploy thermal cameras, and these have reportedly been installed in buses as well, warning drivers about the presence of people with a fever onboard. A short video shared by the Global Times shows thermal cameras embedded in “high-tech smart helmets” worn by police agents in Chengdu, while a robot uses them to check the temperature of passersby in Guangzhou. If temperature is not an entirely helpful metric given COVID-19’s long incubation period, medical imaging procedures are central to its diagnosis, and platform companies like Alibaba and Ping An both claim to have developed automated systems capable of detect coronavirus in CT scans with a higher accuracy than human evaluation in dramatically shorter times. More suspect claims – such as the development of a gait recognition system that could help tracking the virus – also abound, but it seems undeniable that machine learning applied to medical imaging can improve the processing of both citizen flows and medical data. 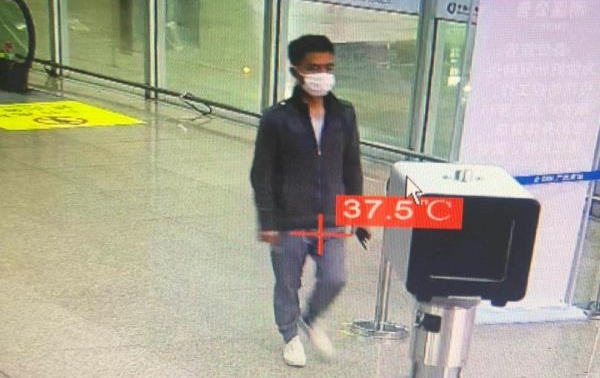 To answer my initial question: China developed its optical position in confronting the COVID-19 crisis by marshaling preexisting digital infrastructure and the surveillance apparatuses overlaid on top of them, and re-orienting large-scale technical systems (and the private companies behind them) towards the provision of an imperfect hodgepodge of technologies of vision: traffic and thermal cameras, drones and other automated vehicles, smartphones and QR codes, combined and nested in search of useful optics for the evolving state of exception. To be sure, this happened later than it should have, after cover-up attempts and the silencing of concerned medical professionals, with a delay that is costing more and more lives both in China and across the world. And to be even more sure, these technologies have been often tested and showcased in less-impacted cities and regions, while Hubei and its provincial capital Wuhan were struggling with much more dire lack of hospital beds and supplies.

But in general, the widespread use of machine vision in responding to the COVID-19 outbreak – with both the innovation of tried and tested diagnostic technologies and the experimental reconfiguration of large-scale surveillance systems and vernacular usages – raises important questions about machine vision and its often assumed dehumanizing or illiberal potential. Rogier Creemers has sharply identified an ontological shift in China’s digital governance from the model of the panopticon to that of the ‘panspectron’, which aims at making Chinese society “legible and predictable” (2017, p. 89) by intersecting constant streams of ambient data instead of relying on direct surveillance. The question to ask is how much these sorts of optics can contribute the kinds of seeing – at the inhuman sensory scales of viral contagion and global flows – that a state of exception requires to make itself unnecessary; in the case of a pandemic threatening to lock down the entire planet, this should by now be a pressing concern.

Scott, J. C. (1998). Seeing like a state: How certain schemes to improve the human condition have failed. Yale University Press.