The first World Internet Conference was held November 19-21, in the scenic water village of Wuzhen (proudly endorsed by 7,000 years of history). English-language tech bloggers and news outlets were mostly outraged at and/or dismissive of the event: how dares China host a World Internet Conference while also censoring content, blocking websites and curtailing freedom of expression!? Don’t they have a face? And anyway, nobody will show up because Western tech companies support liberalism and democratic values – another case of wishful Chinese thinking closed. But was this the case?

Many Chinese Internet researchers would agree it wasn’t, and would also argue that the organization and the framing of the event weren’t unexpected moves: Chinese authorities have been pushing on the rhetoric of nationalizing Internet governance for quite a while, and with recent reshuffles in the administration – as Xi Jinping has set up a State Internet Information Office more independent from the SARFT, and sits in a working group on Internet security – have clearly moved towards a centralization of the oversight of the Internet. This post is just an attempt at playing around with some snippets of Chinese-Internet-related news from the last three weeks, trying to see if common trends emerge from the post-Wuzhen, and how they relate to more dated (but by no means less relevant) scholarship. If you’re interested in more regular and updated digests, you’re welcome to follow the Chinese Internet Research Network (CIRNet) Twitter account:

A 2001 article by Nina Hachigian titled China’s cyber-strategy is a very interesting starting point: thirteen years ago, policy-making was still pretty adamant about the ineluctable march of technology. As Hachigian argues:

“In the near term, the Internet’s effects will not threaten the CCP’s power because the party’s management tactics are effective, because only a small proportion of the population is on-line, and because few care to challenge the ruling regime during the present period of economic and political stability. But perhaps five years hence, when one in ten Chinese citizens will have Internet access and virtually everyone will know someone with an account, the shift in information control and communication will have the potential to undermine CCP rule. Exposure to new ideas, new perspectives on government actions, and events in China will have grown. Economic independence from the state will have increased. Connections between citizens will have multiplied. A political or economic crisis in this wired China of the future would unfold differently than it would today” (p. 118)

Enter Wuzhen, and almost one in two Chinese citizens have Internet access, more and more people are exposed to new ideas and perspectives on local, national and international events, economic independence has increased, social connections have multiplied… thirteen, not five years have passed, but the crisis hasn’t arrived, the party’s management tactics are still quite effective, and actually the ‘wired China of the future’ is already making moves to push its own idea of Internet governance: one based on national sovereignty.

At the helm of this “farcical” and “ridiculous” endeavor is Mr. Lu Wei (鲁炜), catapulted under the spotlight of Western media after a career in Guangxi’s branch of Xinhua News and a stint as vice-major of Beijing as soon as he got promoted as Chairman of the SIIO. Indeed, he seems to have a sense of humor, since he reportedly proclaimed that: “Our censorship of NYTimes in China is just like how you can’t get People’s Daily everywhere in America.” This comment, verging on absurdist satire, is a poignant example of how much the Chinese government’s position regarding ICTs has shifted, over the last ten years, from naive optimism to sardonic master cynicism: in 2004, writing enthusiastically about digital libraries, Huang Qunqing described the marvels of global access, and the contrast is striking:

“News online is free. Users can read Guangzhou Daily in the USA or read the New York Times in Guangzhou city without limits of cost, region or politics. Many young ‘netizens’ prefer the Internet editions of newspapers to the printed editions, because they can read the news online before their work or during their work-break” (p. 182)

Even though Lu Wei’s reported claim might be an off-hand jest – I’m pretty sure Mr. Lu knows the difference between print and digital media – a constellation of news stories from the past weeks might trace a similar shift in policy and negotiations parallel to the recent SIIO moves. The most discussed has probably been the news of China banning puns which, on a closer reading, is revealed to consist in a directive aimed at “radio and television authorities at all levels” to “tighten up their regulations and crack down on the irregular and inaccurate use of the Chinese language, especially the misuse of idioms” – quite a far cry from a Cultural Revolution-style crackdown on laughter. Let’s remember that already four years ago, as chronicled by Gong & Yang (2010) in their case study of Hu Ge’s The Bloody Case of a Steamed Bun viral video:

“Bothered by the increasing numbers of egao clips, the State Administration for Radio, Film and Television (SARFT) planned to announce new regulations on online videos and required the authors of egao to apply for a permit. Guangming ribao (Guangming Daily) also organized a workshop, invited experts from the media and universities, and discussed how to prevent egao. The participants analyzed egao from the perspectives of morality, law, and culture, and called for a stop to the egao trend.” (p. 23)

From steamed buns to steamy puns, opaque directives aimed at expunging neologisms, humorous homophones, acronyms and idioms from the language of news media are perfectly in line with the continuous attempts at linguistic normalization and cultural sanitization well summarized in point eight of the draft declaration slipped at midnight under the doors of guests in Wuzhen:

“Eighth, dedicate to the healthy growth of young people. We should strengthen the protection of minors online, crack down on the spread of pornography and violence, and make sure that the Internet does not damage the future of mankind.”

Anything new? Definitely not. The 2003 “Interim Regulations on the Management of Internet Culture” (a curious title indeed) already warn about the illicit dissemination of:

6. contents that spread rumors, disturb social order, and undermine social stability; 7. contents that promote lewdness, gambling, and violence or that abet criminality; 8. contents that insult or slander others or infringe on the legitimate rights and interests of others; 9. contents that harm public morality or the nation’s excellent cultural traditions;

Indeed, it could be argued that these reactionary regulations and recurring crackdowns on the lively repertoire of Internet users’ vernacular creativity in favor of “the nation’s excellent traditions” (including a largely simplified and rationalized writing system, yeah…) are typical of authoritarian China, but an article on CNN warning parents on the hidden dangers of Internet acronyms adopts strikingly similar arguments for the healthy growth of young (American) people: some acronyms can be a shorthand for sex, drugs and alcohol! Experts say parents should be aware of acronyms and talk to their children about them!

We might start to sense a tinge of similar populisms behind the different proclaims, especially when they branch out in so many different domains: in Shanghai, a new regulation prohibits the “mixed use” of Chinese and English in advertisement; Xi Jinping, possibly sick of architectural egao, expresses his distaste for supermodernist starchitecture; SARFT announces that creative and cultural workers will go back to the countryside for a month a year to “get into the thick of life and be better in touch with the people”. Is there a pattern here? Is Xi the true heir to Mao, setting up the stage for a new Cultural Revolution to cleanse China of Rem Koolhas’ buildings and lexical jokes? 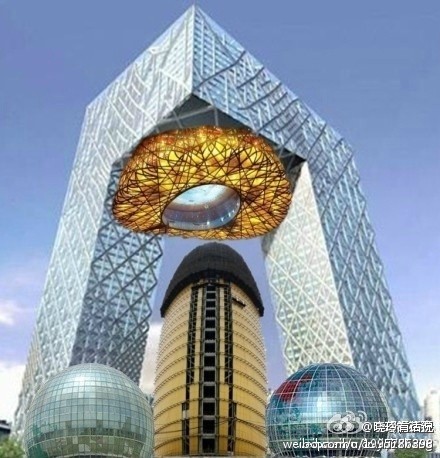 Jens Damm (2007) warns against the usual knee-jerk reaction to the weekly dose of China news: after years of waiting for the democratizing effects of the Internet, “the focus of Western observers has now shifted toward the role of the government: every single action taken by the Chinese authorities is immediately interpreted as a ‘crackdown’ and as censorship: a ‘control discourse’ has emerged” (p. 278). In short, we might be appalled at the idea of regulations issued to prescribe the use of language on news media, but for Chinese citizens “this is not astonishing: they expect the government to censor all media” (p. 283, my italics), and we shouldn’t assume that authoritarianism is always displeasing.

It is around this concept of expectancy that Magnus Wilson (2009) lays down a provocative thesis. The discourse of Western tech and policy reporting on China, he argues, is still trapped by the assumption that at some point, the Chinese state will not be able to maintain both control and economic growth, and will have to choose between unrest or democratization: “Essentially, the argument is that the profit motive recognises no ideology and therefore the decentralised marketization of the Chinese economy makes control and censorship increasingly problematic.” Yet, this assumption works only if profit really recognises no ideology: Mark Zuckerberg giving a speech in Mandarin at Tsinghua University, sending off his Vice President to do the same stunt in Wuzhen, and finally hosting Lu Wei in the US while recommending copies of Xi Jinping’s book The Governance of China to his employees all point in a slightly different direction – capital and ideology finding (indeed unpleasant) ways to recognize each other.

Moreover, according to Wilson, the accommodations of a decentralizing economy engender a “fantasy deficit” that actually drives nationalist sentiments and the support for reactionary claims. In the context of a decade through which “several foreign Internet companies – from Yahoo! and MySpace to Google and Facebook – have attempted to enter this enormous market, riding on their success in other parts of the world” (Oh & Zhang, 2010, p. 227), a degree of control and protectionism might actually project a reassuring image of the state:

“for young upwardly moving Chinese, the most avid consumers of foreign media in China, it is not just comforting to know that authoritarian control is not so absolute to prevent one’s pursuit of enjoyment […] It is also that there is an additional sense of security in the fact that the authorities are still operative at both a symbolic and (potentially) a very real level against those who threaten to jeopardise China’s integration with the global economy.” (Wilson, 2009)

Highlighting how economic growth and a generalized decentralization are actually sustained by their own backfiring as nationalist sentiments and support to conservative symbolic performances is a seductive way of slashing open the vicious circle of determinisms. “The flip side of China’s quandary over the Internet is the United States’ fortune—because the Internet is a commercial vehicle, U.S. and other foreign businesses will push for its expansion in China without added incentives,” writes Hachigian in 2001 (p. 133, my italics); a decade later, local companies “leverage on their home advantage to instill a sense of national pride upon users, thereby influencing them to use domestic services” (Oh & Zhang, 2010, p. 229), and protectionist policies double as reassuring performances of legitimacy: “the Communist party has always been very alert to the importance of China’s ‘symbolic environment’ […] and the media has long been used by the party as a vehicle for ‘thought work’ by which it promotes ‘socialist spiritual civilization'”, so that “the cuts become a defence of the authorities’ own image as the guardians of China’s status in the eyes of the idealised foreign other” (Wilson, 2009).

Why forbidding puns if everyone keeps joking anyway? Why banning Facebook if 93 million Chinese users have VPNs? Why prohibiting English from advertisements if people study it in school? Governmental legitimacy, rhetoric expectancy, symbolic performance and national sovereignty can help making sense of the quirky carnival of Wuzhen.

And bets for the launch date of Facebook.cn are open.